The DustBuster by Black &amp; Decker is an extremely popular line of handheld vacuums, and the CHV1510 is the bestselling modern-day DustBuster. The reason being, is that it simply provides excellent value for money. It’s powerful and incorporates a design that’s intended for quick and easy vacuuming.

It’s very similar to the CHV1410L model, which is probably the second bestselling model after this, and has the main difference of using a Lithium-Ion battery instead. In this review of the CHV1510, we see how the battery difference affects this handheld vacuum, and how it compares with the CHV1410L.

Strong Suction: Incorporates 25 air watts of suction power and Cyclonic Action Technology which blows sucked up rubbish away from the filter to keep the vacuum’s suction power consistently strong.

Easily Reach Tight Spaces: Features a slim, rotating nozzle with an integrated crevice tool at the head, which extends to let you reach into tight areas and corners easily.

Can Suck Up Large Debris: The wide mouth design allows you to vacuum large pieces of dirt and debris much easier.

No Accessories To Misplace: The two tools that come with the CHV1510 are both located on-board. The crevice tool is built-in and the brush is attached underneath the head.

Wall Mountable: The docking station that’s included allows the vacuum to be placed horizontally, vertically or mounted on a wall.

Customers know best about a product as they’ve tested it out over a period of time. We’ve closely researched over 100 positive and negative user reviews on Amazon to give you an overlook of their experiences with the Black & Decker CHV1510.

If you’ve seen the other popular DustBuster models, the CHV1410 and CHV1410L, then this model has pretty much the same design. You’re still going to get the extending crevice tool that’s fitted at the tip of the nozzle, and the brush attachment that’s clipped on underneath the nozzle. 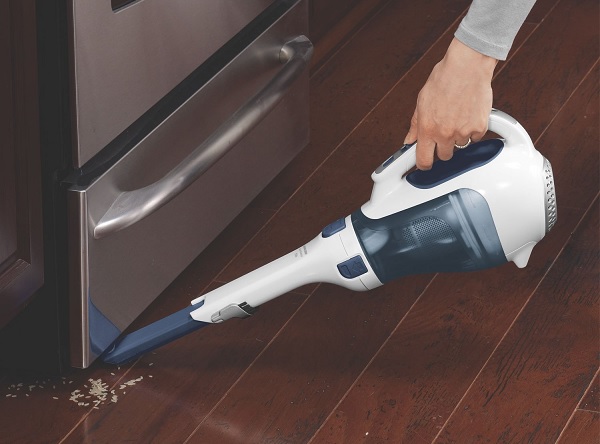 The vacuum itself weighs only 3 lbs, making it one of the lightest handheld vacuums around. This is great if you’re maneuvering around to reach tight spots for a long period of time, as there’s less strain to your wrist and arms.

Most users find the crevice tool very useful, as it allows them to reach into tight spaces, but a few users have complained about it being too easy to push back in. I guess they were unaware that there’s a lock located below the nozzle tip which secures the crevice tool.

The brush attachment is ok for dusting down surfaces, but most users don’t really use it much, since the suction is strong enough to suck up surrounding dust anyway. Like the aforementioned DustBusters, the CHV1510 works best on hard surfaces, although it can used to remove pet hair from carpets and upholstery, albeit a bit more difficult.

Fortunately, the docking station allows you to dock the handheld vacuum either vertically, horizontally or even mounted on a wall, something the more expensive CHV1410L doesn’t let you do. However, the docking station does not charge the device. You need to use the separate adapter. When the vacuum is charging, there’s a red LED light to indicate that you’ve properly connected the device.

Most users have praised the powerful suction power of the DustBuster CHV1510. It also has one of the highest-rated suction power of all cordless handheld vacuums, as researched by Consumer Reports.

It’s more powerful than the more expensive CHV1410L, beating it in the air watts department (25aw to 23aw) and voltage (15.6v to 14.4v). It’s able to pick up various sized dirt and debris very easily, as well as remove hair from carpets and furniture.

However, with this much power comes a slight nuisance. It has been described as being rather loud, more so than the other DustBusters and other handheld vacuums.

You may or may not have heard about the differences between NiCad and Lithium-Ion batteries, but to put it simply, Li-Ion’s tend to hold a charge better and last longer than their counterparts. 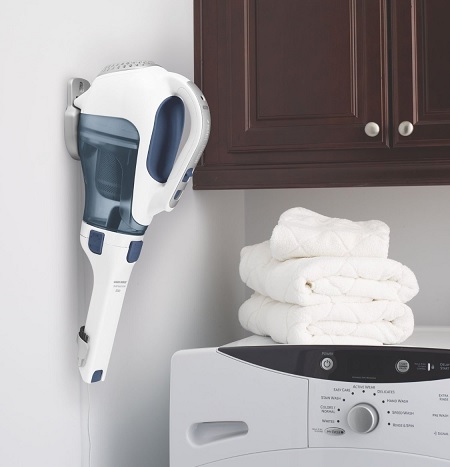 The DustBuster CHV1510 incorporates a NiCad battery, however, it does a really good job at maximizing its capabilities.

On average, users see between 15-20 minutes of continuous running time, while some users get up to an impressive 30 minutes. Black & Decker do recommend that you charge the vacuum for around 24 hours for a full charge, so that’s what’s needed to achieve the best running time time.

As you’re reaching the end of its running cycle, the suction power will begin to fade as the battery becomes drained. This is typical in NiCad batteries, but because of energy saving nature of the CHV1510, it holds a charge much better than other cordless vacuums that use the same type of battery.

To clean the DustBuster CHV1510, you need to twist the center and the device comes apart in two. One end holds the dirt container and filter, which can both be removed from the main based to be washed.

The dirt container has a 0.6 litre capacity, which although may seem small, it’s actually a decent size when compared with other bagless handheld vaccums. It’s easy to clean, just rinse under warm water.

The filter comes in two sections. The outer plastic pre-filter, which washes easily just like the dirt container, and the inner clothe, which can also be washed but needs to be dried out completely. Fortunately, the Cyclonic Action Technology of the DustBusters helps to keep dirt and dust away from the filter. This does two things – Maintains strong suction and keeps the filter cleaner. With that being said, it’s still recommended that you replace the filter after several washes.

The Black & Decker CHV1510 is a high-quality handheld vacuum that you should see at least a couple years of use out of it. Of course, this depends on how frequently you use it, but if it’s not abused, it will last long.

If you’re at all worried about its NiCad battery life, fear not, because the Energy Star approved charging system ensures that the battery life is extended as long as possible. There’s also a 2 year limited warranty included which covers manufacturing faults, just to give you that extra peace of mind.

Customers have given the Black & Decker CHV1510 overall positive review ratings on Amazon.

There’s a reason why the Black & Decker CHV1510 is the bestselling handheld vacuum on Amazon. Actually there are several, but the main reason is because many users consider it to be pound-for-pound, the best value handheld vacuum.

Granted, the charging time is excessively long, but when you factor in its suction power, good operating time and effective design, relative to its price, you’ll be hard pressed to find another handheld vacuum that will provide you with so much for so little.

If you’re after a handheld vacuum that has better charging times, as well as a longer battery life, I recommend that you check out the Black & Decker CHV1410L or the Platinum BDH2000L instead.

Check The Live Prices For The Black & Decker CHV1510 Now!