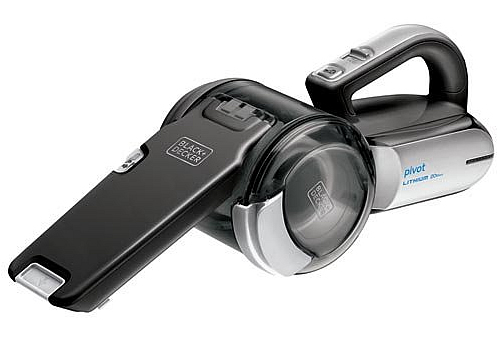 Black & Decker’s popular pivot vac has just gotten a whole lot better. The latest Pivot BDH2000PL for 2014 boasts a better battery more suction power among other features. Popularity for this model is already soaring and it has garnered all round favorable reviews.

In my review of the Black & Decker Pivot BDH2000PL, I’ll be taking an in-depth look at what improvements there are to its predecessor, and how it fares in each department.

Extra Strong Suction Power – Boasting an incredible 35 air watts and cyclonic action that keeps dust and dirt away from the filter, the Pivot BDH2000PL is more powerful than all previous Black & Decker handheld vacuums, and even Dyson models in their standard mode.

Long Battery Life – Thankfully, this has a Lithium-Ion battery integrated, unlike the previous Pivot Vac. This means that the overall lifeline of the battery will be much longer.

No Loss of Suction – Also thanks to its Li-Ion battery, suction power remains consistent and will not fade even when the battery is nearly depleted.

Pivot Movement for Extra Convenience – You can now reach hard-to-reach areas as the nozzle is able to pivot over 180 degrees, and an extending built-in crevice tool at the tip of the nozzle provides extra length also.

Quiet Operation – This is essential if you ever clean at night time. The ‘whooshing’ sound during operation is quieter and much less annoying when compared to other hand vacs.

The people that know best about the product are those who have actually purchased and tested it out over a period of time. We have researched over 30 positive and negative user reviews on Amazon to provide you with the good and bad points of their experiences with the Black & Decker Pivot BDH2000PL.

When you combine a 35 air watt engine, Cyclonic Action technology to keep the dust and dirt at bay from the filter, and a 20V Lithium-Ion battery, you get a consistently powerful vacuum cleaner that is capable of easily sucking up small and medium sized debris.

To put things into perspective, Black & Decker’s premium Platinum range of handheld vacuums only have 23 air watts, and the latest Dyson DC59 Animal only has 28aw in Standard Mode.

Anytime you get a hand vac that incorporates a Lithium-Ion battery, you know it will perform well. However, what matters is the quality of the battery and how the hand vac utilizes its power to reach its full potential.

To reach a full charge, it takes approximately 2-3 hours when placed on the included charging dock, which is very quick and even surpasses the next best by 1 hour. You don’t even have to worry about taking it off charge, as the battery will automatically stop charging once full and the blue light indicator will turn off.

Fortunately, this light is dimmer than previous B&D hand vacs after complaints of the light being excessively bright.

The battery on the Pivot BDH2000PL doesn’t lose its charge after periods of inactivity, it doesn’t fade in power regardless of whether the battery charge is full or nearly depleted, and running time on it lasts around 20-35 minutes which is not the best (the B&D Platinum BDH2000L has higher), but still great nonetheless.

Even though it’s not designed to be replaced, it’s still possible because there are two screws on the side panel which allows the battery to be removed and replaced. This was non-existent on the previous Pivot Vac. In any case, you can expect a long lifespan for this high quality battery anyway.

When you first lay your eyes on the Pivot BDH2000PL, you can see that it looks attractive and well designed, but when you hold it in your hands, you realize that it’s very well-constructed and feels more expensive than it actually is.

The innovative Pivot mechanism is smooth and effortless to move around, allowing you to reach into narrow areas and above furniture with ease.

Just like with Black & Decker’s other hand vacs, there’s an extendable crevice at the tip of the nozzle for a longer reach, and a brush that flips upwards and locks into place for cleaning upholstery.

One simple but major improvement is that there’s a rubber flap within the dirt canister to prevent dirt and debris from falling out of the nozzle, something that was a problem its less expensive alternative (the Pivot PVH1810). 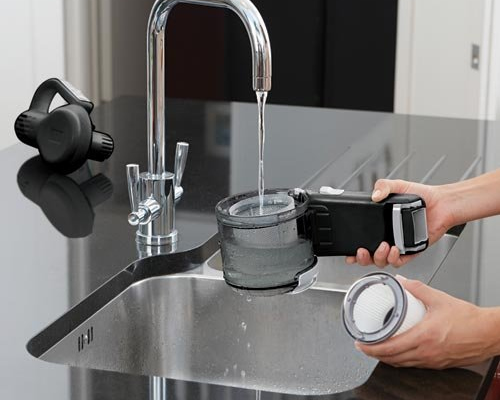 The translucent dirt canister lets you know when it’s time to empty the dirt. It provides 42 percent more capacity than the previous model and lets you either open the side panel to pour dirt away, or remove the entire bowl completely to clean/wash thoroughly.

Removing the washable filters (model PVF110) are done by simply twisting the lock, and they can be removed without having to take apart the dirt canister. This is all very simple and straightforward.

The Black & Decker Pivot BDH2000PL was only released on March 2014, and at the time of writing (June 2014), there isn’t enough data to assess how long this will last over the coming years. However, there are several important factors to make a calculated judgement.

First of all, the main reason why most hand vacs fail is due to the battery. The Pivot BDH2000PL incorporates a very high quality and reputable Lithium-Ion battery. Secondly, it appears to be very solidly built, so you won’t have to worry about cracks and dents.

Thirdly, Black & Decker offer a 2 year warranty on this model so that should give most consumers enough confidence in this product.

The Black & Decker Pivot BDH2000PL has an overall positive review rating on Amazon.

Here’s a brief video showing the main differences between the original Pivot Vac and the new Pivot BDH2000PL.

After thorough research, these are the major points I can conclude about this handheld vacuum.

With the high specifications of the Black & Decker Pivot BDH2000PL and it’s very reasonable price point, it will be very hard to beat.

The excellent value on this handheld vacuum is quite refreshing when compared with other models that have similar specs. This is certainly one of the best hand vacs that Black & Decker has released in a long time.

Get The Live Prices On The Black & Decker Pivot BDH2000PL Handheld Vacuum Now!