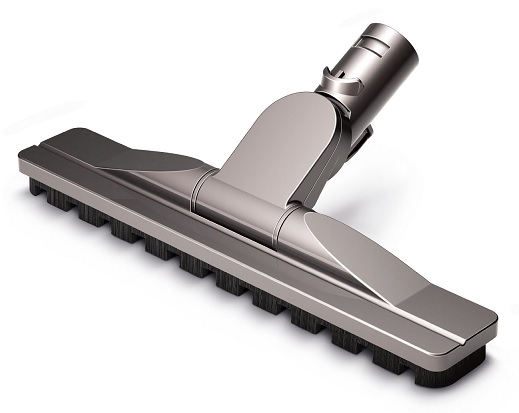 One of the bestselling vacuum accessories on Amazon is the Dyson Articulating Hard Floor Tool. Designed for gentle cleaning on hard floors and other delicate floors. It appears to be a sturdy and well-engineered product, and users have spoken by voting it highly, making it one of the top-rated Dyson accessories.

Does Not Damage Floors: This tool incorporates soft bristles so that they won’t cause any scratches or nicks to your floors.

Two Curtains Of Bristles: By having this feature, it enables more effective cleaning as the first curtain is for removing large debris while the second is to prevent suction from escaping.

Easy To Steer Around Awkward Areas: By using a 180 degree pivoting mechanism that connects to the head, it allows for smoother steering into tight gaps between furniture.

The people that know best about the product are those who have actually purchased and tested it out over a period of time. We have researched over 50 positive and negative user reviews on Amazon to provide you with a general consensus of their experiences with the Dyson Articulating Hard Floor Tool.

There’s no question that Dyson has a knack for quality, and it’s no exception for their Articulating Hard Floor Tool. Described by users as having a solid build, it measures just under 12 inches wide and has a very low and narrow profile which allows it to fit under and between various sized gaps.

The majority of users find this tool very effective at getting into tight spaces such as between cabinets, under beds and other furniture. This is due to the head being able to pivot into a sideways and flat out position. Essentially, it lets you do cleaning jobs that normally require you to get on the floor, standing up instead.

The movement of the brush has been described as smooth and gliding over hard floors (what it’s solely designed for), and it was also pointed out that it’s particularly good on hardwood floors. For tiled floors, it the bristles effectively removes dirt from the grout lines.

As great as it may sound, it doesn’t come without its problems, however minor they may be. When it’s lifted up to take to another place, the head can occasionally flip itself over and needs a bit of twisting to get it back into the desired position.

The other thing that some users have had problems with is that sometimes instead of sucking up small objects such as rice, pebbles, dog food and so on, it just ends up pushing it around until you either lift and hover the head over the debris, or just continue to push it around until the debris finds it way in.

This problem exists because half the time, the outer bristle wall come in contact with the debris first (there are gaps along the outer wall). Also, the bristles are very effective at collecting hair and dust, but will often get stuck between the bristles and will have to be removed.

For most users that have come across these issues, they are just minor design flaws and are willing to put up with them because the positives far outweigh the negatives.

According to Dyson, this product fits all Dyson upright and cylinder vacuum cleaners (DC01 – 08, DC14, DC17, DC18 will need the included adapter). As for all other Dyson vacuums, the head will fit the wand or hose without the adapter (including Dyson’s handheld vacuums that includes a wand e.g. DC35 & DC44 Animal).

The Dyson Articulating Hard Floor Tool ranks among one of the bestselling and top-rated Dyson accessories on Amazon.

You can watch a short video demonstration of the Dyson Articulating Hard Floor Tool below.

It’s not absolutely perfect but the Dyson Articulating Hard Floor Tool still ranks among the best vacuum brush tools for hard floors due to its ability to make cleaning much easier, with many users considering it to be the best and a tool they cannot do without.