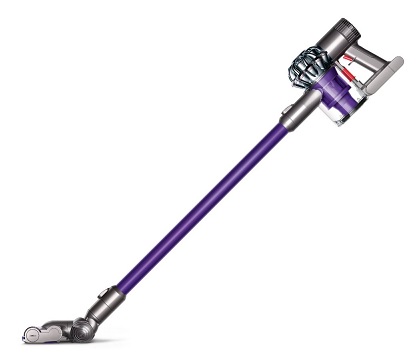 It has received overwhelming favorable reviews, and the Dyson DC59 is set to become Dyson’s best cordless handheld vacuum yet. You probably already know that Dyson is arguably number one when it comes to vacuum technology, and also number one, when it comes to being the most expensive.

The DC59 is no different. It’s expensive, but the real question should be is it worth the hefty price tag? In our in-depth review, we’ll be answering this question, and also looking at how it compares with its also great predecessor, the Dyson DC44 Animal (read full review here).

Strong Suction Power: Powered by a digital v6 motor, it’s said to spin up to 3 times faster than ordinary motors and up to an incredible 110,000 times per minute, resulting in a very powerful suction.

Doesn’t Lose Suction: There are two factors that contribute to this. First, it has a Lithium-Ion battery that has fade free power, and second, it adopts cyclonic technology (15 cyclones to be precise) which helps to increase airflow and trap tiny dust particles.

Enhanced Running Time: The DC59 is capable of 26 minutes of highly effective and continuous cleaning, and 6 minutes on Boost Mode, which increases suction power by nearly 4 times.

Versatile Cleaning: It includes a multitude of attachments which allows you to reach high, low and far by using the aluminium wand, and the main and mini motorized floor tool does a fine job at removing pet hair from carpets and upholstery, as well as dust, dirt and debris from hard floors.

Convenient Storage: The included docking station holds and charges the vacuum, and has storage space for two other attachments. 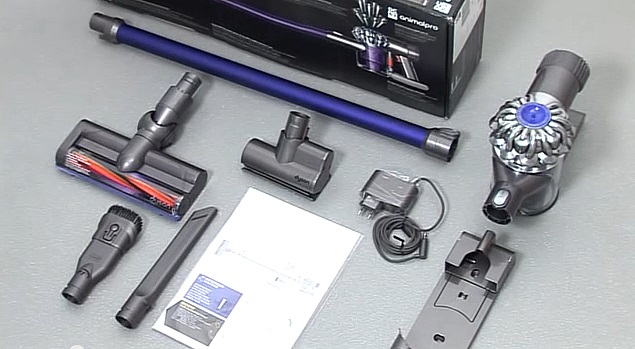 Though it’s a relatively new product, many customers and consumer analysts have had the chance to test out the Dyson DC59. They know the product better than anyone else, barring the folks at Dyson. We have researched over 50 positive and negative user reviews on Amazon and other popular consumer websites to provide you with an overall insight of their experiences with the Dyson DC59 Animal. 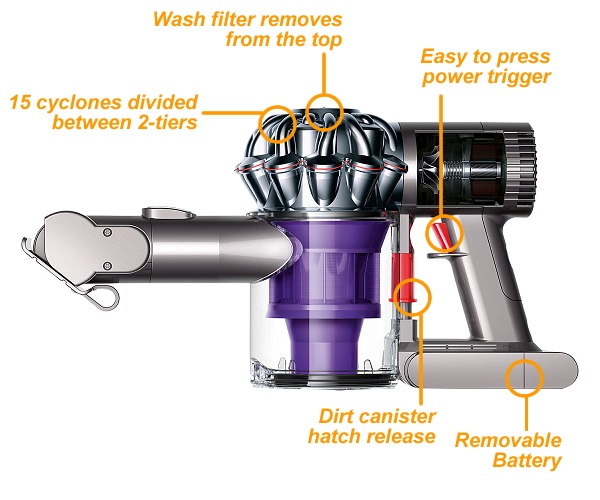 At first glance, the most obvious differences between the aesthetics of the DC59 and DC44, is the color and the upper area that holds the cyclones. However, upon close inspection, there are many different improvements both in design and functionality, which are pointed out throughout the below sections. I you want, you can skip straight to the summary at the bottom.

Firstly, let’s go over the inner technology which Dyson is so well-renowned for. You’ll notice that the top half of the vacuum which houses the cyclones is larger than that of the DC44. This is because it has 15 cyclones divided between 2 tiers, compared to just 6 over a single tier. The additional cyclones and refined technology helps to increase airflow, enables better dust filtering and improves suction power.

Also contributing towards the powerful suction of the DC59 is its improved digital 350 watt V6 motor, which has 50%  more power compared to the V2 motor on the DC44.

Weighing in at 4.6 lbs, the DC59 is 0.3 lbs lighter than the DC44. While this is not a huge amount by any means, it certainly helps to relieve stress on your wrist and arm when cleaning hard to reach areas with the attached wand. If you actually put things into perspective, the DC59 incorporates better technology while weighing less.

It appears that Dyson have also improved the release mechanism, making it even easier to release attachments and switch over effortlessly. There are several improvements to the dirt container, which you can read about in the Ease Of Cleaning section below. 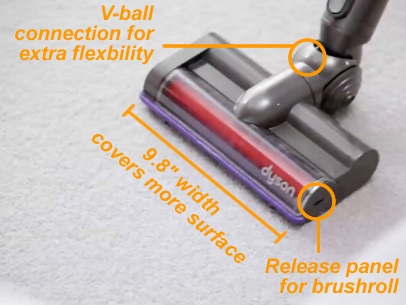 This is the main attachment and is designed for cleaning hard and soft floors. You’ll see the same features on this as seen on the DC44’s main floor tool, such as the carbon fiber filaments (removes dust from hard floors), nylon bristles (removes ground-in dirt) and V-Ball connection that allows the head to steer around smoothly and also, to become completely flat when cleaning under furniture.

It should also be noted that there’s a side panel on this tool that can be unlocked with a coin, allowing you to take out the brush bar and remove any tangled hair.

There isn’t really much difference with the mini motorized floor tool compared to the one on the DC44. However, it’s a bit more effective with the extra power from the main motor. It’s easy to use when directly attached to the main unit without the wand, but can be used in conjunction with the wand to maneuver around tight spaces.

This tool is handy for vacuuming stairs, and removing hair from carpets and upholstery. Just like the large motorized floor tool, you can also unlock the side panel to slide out and clean the brush bar.

The crevice tool for the Dyson DC59 is one of the best we’ve seen. It’s thin and has a long reach, allowing you to enter into very tight spaces between furniture, under couches and whatnot.

The combination brush tool is just as useful, as it converts from a regular nozzle with a red brush patch that helps to remove pet hair, to a dusting brush. Both the combination tool and the crevice tool can be attached directly to the vacuum, or used with the wand.

As for the docking station, you’re going to get the same design as the one that’s included with the DC44. Most people affix it to their wall, and it holds the two aforementioned attachments. It cannot hold any of the floor tools since they’re too wide to fit. You can plug the adapter into the docking station to mount and charge the vacuum, or you can plug it directly into the vacuum without having to mount it.

Just when you thought it would be very difficult to outperform the Dyson DC44, the DC59 Animal has gone and done exactly that. Dyson have made things simpler but more powerful.

As explained above, the incorporation of the Radial Cyclone technology with the newly refined motor results in an even more powerful handheld vacuum that could potentially replace a full sized vacuum. It’s really that powerful.

The vacuum is activated via a trigger button, which is lighter to press than the one on the DC44. This is especially useful because after a while of continuously pressing the trigger to clean something, your hand can get tired.

It has 28 air watts in standard setting, the same as the DC44, but as soon as you switch it to Boost Mode via the button on the back, that’s when things get amazing. Suction power is nearly quadrupled, at 100 air watts, 35 air watts more than the DC44’s Boost Mode, and strong enough to suck up plastic toys from a short distance away.

For a cordless vacuum that’s as powerful as the Dyson DC59, the battery performance is exceptional. It outperforms most weaker cordless vacuums in charging and running times, whilst being twice or thrice as powerful.

To fully charge the device, it takes 3.5 hours, two hours less than the DC44 and the battery transmits 1.5 times more power, which increases the run time to 26 minutes compared to 20 minutes in standard mode. However, in Boost Mode, it’s able to run for 6 minutes, 2 minutes less than the DC44, but bearing in mind that the time is sacrificed for much more power.

The run time actually feels much longer because the power is not constantly on. Instead, it’s only on when you press down on the trigger, and instantly turns off when released.

The Lithium-Ion battery should last a long time, as they tend to, but when it comes to an end, it can be replaced by unbolting the screw. However, expect to pay around $50 of an OEM battery, and $70 for the official Dyson battery.

The dirt container is still translucent to allow you to see the contents, and the push release button is now located at the center, between the handle and the container itself (where the wash filter was previously), which makes it much easier to empty, whereas before, it was located on just one side. 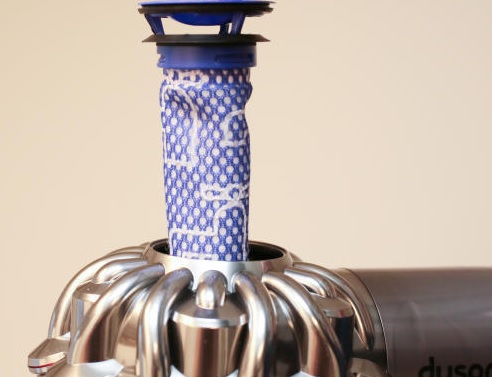 The cone shaped wash filter is now located in the middle of the cyclones, and is taken out directly from the top.

Some people were unhappy with the 0.35 liter capacity on the DC44, so Dyson have increased it to 0.40 liter on their new model. When you’re emptying the dirt container, you need to make sure that you hold it directly above a bin and tilted at a slight angle in order to get all the container’s contents in the bin, and not on the floor.

Whenever you hear about a new Dyson product, you already know that it’s going to be pricey, but the Dyson DC59 Animal has taken us by surprise, and not in a good way. It hits the market at $499, which is $100 more than what the DC44 Animal first retailed at.

In due time, we’re certain that the price will drop, but as of when, we cannot say. There’s no doubt that no other cordless handheld vacuum comes close to the DC59’s performance, with the exception of the DC44. But even with all the new improvements, is it really worth the price? That’s really for you to decide.

One thing is for sure, is that the Dyson DC59 Animal will last you for years to come, and you’ll likely be using this more than your regular vacuum, unless you have a huge house.

The Dyson DC59 has overall positive review ratings on Amazon, outperforming the its predecessor the DC44.

Click here to read reviews of the Dyson DC59 Animal

Here’s a short video demonstration of the Dyson DC59 in action. The video is silent, your speakers are fine.

If you didn’t read all of the review, then here is a summary the improvements and differences the DC59 has over its predecessor, the DC44.

Yes, the Dyson DC59 Animal does improve in nearly every aspect of the DC44, which only serves to make cleaning chores much quicker and easier. However, it’s a luxury product that only some can afford, or rather more willing to pay for. If you want a less expensive alternative, then I highly recommend that you check out our review of the Dyson DC44 Animal, otherwise, if do get the DC59, it’s highly unlikely that you’ll be disappointed.

Check Out The Live Prices On The Dyson DC59 Animal Now!