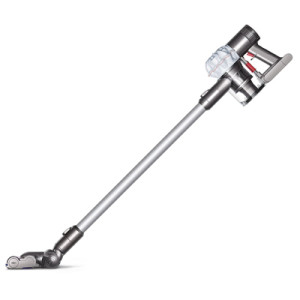 The latest cordless handheld vacuum to be released by Dyson is the V6 Cordless. Now, there are 5 different versions of the V6 which consists of the Original V6 Cordless, V6 Fluffy, V6 Animal, V6 Total Clean and V6 Absolute.

The one that I’ll be reviewing is the Original, which is the most basic and least expensive model.

Why so many different versions you ask? Well, each model is optimized for specific tasks, and of course, this would mean different price tags. However, the only differences between each model is that the others include additional attachments.

Is it really worth paying the extra price for some extra (albeit decent) attachments? That depends on how often and how arduous your cleaning tasks are. But for most small and medium sized homes, the entry level Original V6 Cordless is a good choice.

In my review, I’ll be comparing this model to previous Dyson handhelds, and what improvements, if any, has been made.

Powerful Suction – Matching the suction power as seen on the DC59 Animal but for half the price, the V6 Cordless boasts 28 air watts of suction power which is increased to a huge 100 air watts on maximum boost mode.

Good Run Times – Though it doesn’t run as long as some other Dyson handheld vacs, the V6 Cordless still provides an impressive run time of 20 minutes on normal mode, and 6 minutes on boost mode, which are both good times relative to its suction power performance.

Good Entry Price – Consumers have been calling for an inexpensive multi-purpose Dyson handheld that includes a wand and motor head, and Dyson have provided exactly that.

What Makes The V6 Cordless Different?

If you haven’t read my review of the Dyson DC59 Animal, then you can read it here. The reason why you should read it is because its specifications are practically the same as the Original V6 Cordless. There are some minor (or major depending on how you see it) differences which will be explained further below.

If you’ve seen the handheld vacuums that Dyson have released in recent years, they’re all pretty much of the same outer construction. Older models have 1 tier of cyclones while recent models including the V6 cordless feature 2 tiers of 15 cyclones in total. While it makes it a little bulkier at the top, the extra cyclones helps to increase air flow and capture very fine dust.

The handheld Dysons are a marvelous piece of construction that’s unrivaled in the vacuum industry. Just to reiterate the stand out points of its design as seen also on the DC59 Animal, here’s a list of them.

Motorized Floor Tool – The only floor tool you get with the Original V6 Cordless is the standard motorized cleaner head, which can be used on any type of flooring. If you’ve owned a Dyson handheld vac before, then you’d be familiar with this tool.

It uses stiff nylon bristles to remove ground-in dirt from carpets and the carbon fiber filaments are responsible for picking up fine dust particles from hard floors. It does an effective job at cleaning dirt and hair, so you’d frequently have to clean it which is made rather simple. Unlock the side panel by twisting it with a coin, remove the brush roll and then hoover it.

Other Tools – The only other tools that come with the Dyson V6 Cordless is a low profile cleaner head designed to get under furniture easily, an aluminum wand, a combination brush tool (combines a crevice tool with a brush) and a very useful wall mounted docking station.

If that’s not enough for you, then you may want to either purchase a separate Dyson tool kit or consider Dyson’s other V6 models which includes extra motorized cleaner heads and cleaning tools. Keep in mind though, they do come with an even beefier price tag.

Is It Worth Paying More For Other Tools?

This question highly depends on how strenuous your cleaning tasks are. All other V6 models include a mini motorized floor tool which is made for reaching tight places and cleaning pet hairs and ground-in dirt, and a long rigid crevice tool.

The V6 Fluffy includes an additional soft roller cleaner head, a new type of floor tool for the Dyson handheld range. This wide tool picks up fine debris and large debris at the same time thanks to its combination of soft woven nylon and rows of anti-static carbon fibre filaments.

Pay more for the V6 Total Clean and you’ll get a mini motorized tool, the soft roller and an even more powerful Direct-Drive cleaner head which replaces the standard motorized floor tool.

At the top of the line is the V6 Absolute, which just features a post motor filter along with all the aforementioned attachments. Without going into too much detail about each floor tool, each one is designed for more power and more versatility.

However, the actual motor and inner workings that drive the vacuum remains unchanged no matter which model you choose. If you have pets that shed a lot of hair and/or kids that can be a bit messy, then perhaps it’s worth paying the extra for those extra capabilities.

At a significantly low price than the Dyson DC59 Animal, the V6 Cordless still provides the same type of powerful performance. At 28 air watts with 100aw when switched to boost mode, it’s enough to easily suck up small and large debris easily.

The charge time is impressive as it only takes on average 3.5 hours to fully charge the unit. Some users have voiced their disappointment in the run time, which gives you 20 minutes in normal mode and 6 minutes in boost mode. It’s not the longest run time that I’ve seen in a cordless hand vac, but for the amount of power that’s provided, it’s quite impressive.

Plus add to the fact that the vacuum is activated by a trigger which makes power consumption extremely efficient as you press the trigger to vacuum, and release it to quickly turn the unit off.

The majority of customers have rated this product between 4 and 5 stars on Amazon, which is among the top of not only Dyson handheld vacs, but all brands.

Here’s a short video demonstration of the Dyson V6 in action.

Myself and others think that the Dyson V6 Cordless is the best value Dyson handheld to come out in quite a while, if not ever. It has the power of the top of the range Dyson handhelds without the expensive price tag you’d normally see with Dyson.

While the other V6 models include more powerful and varied cleaning tools, I don’t think it should warrant such a big increase in price. However, for the most basic V6 vacuum, it’s certainly worth the price and will do a good job for small to medium cleaning tasks around the home.

Check Out The Live Prices On The Dyson V6 Cordless Today!