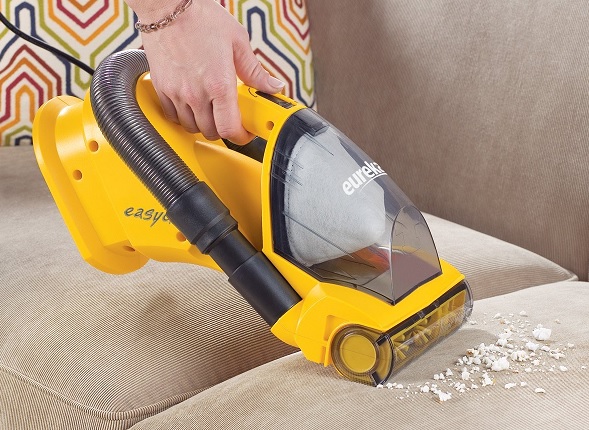 The Eureka EasyClean 71B, also formally known as “The Quick Up” for its speedy yet comprehensive clean, is an inexpensive, powerful and innovative handheld vacuum that is one of the most popular and bestselling handheld vacuums on Amazon. There are several reasons why over 2,000 users have awarded this clever handheld vacuum 5 out of 5 stars.

It provides innovation while remaining simple, and excels in usability. This is due to the fact that it’s designed for multi-purpose use. It has good suction power and an effective cleaning head, most notably for hairs and stairs, and it has a handy stretch hose for confined areas.

Effective Cleaning Embedded Dirt: The revolving brush roll (which can be turned on/off) underneath the front cover combined with the constant suction power is very effective at getting rid of dirt and debris in flat areas, carpets, stair steps and upholstery.

Easy To Clean Stairs: The innovative Riser Visor is a clear plastic cover that stays down when cleaning horizontal surfaces, and flips up to allow the revolving brush to clean vertical surfaces. This mechanism makes it ideal to clean stairs and the backs of furniture.

Suitable For Cleaning Car Interior: It has a 20 foot long cord, which makes it long enough to reach your car from your garage/home. Also, the attached hose and included crevice tool allows you to reach into all the tight areas in your car.

The people that know best about the product are those who have actually purchased and tested it out over a period of time. We have researched over 50 positive and negative user reviews (from 2006-2013) on Amazon to provide you with a general consensus of their experiences with the Eureka EasyClean Hand-Held Vacuum, 71B.

For the majority of users, they love the design while a small minority have problems with certain aspects of it. Nearly all users find that the Riser Visor and motorized brush works extremely well on vertical surfaces, as it’s supposed to, though there have been a few complaints about how heavy and bulky the device is, making tasks such as cleaning inside a vehicle a bit more difficult.

It’s true that this device at nearly 5 lbs is slightly heavier (only by 1 or 2 lbs at the most) than many other handheld vacuums but for most users, the suction power and effective cleaning justifies that issue.

There have been mixed feelings about the design of the hose. Yes the suction is strong, but some feel that the hose is too short and by placing it on the left side of the device, it was not very smart since most people are right handed and feel more comfortable handling the hose with their right hand.

Most users haven’t stated any concerns with the hose while a few have taken more practical measures such as attaching an extension to the hose (both makeshift and a suitable fitting extension hose).

At the rear end of the device holds the crevice tool, but beneath that is the exhaust. A small minority of users would have preferred it to be on the side, as it blows dust around. An effective solution offered up by others was simply not to put it over what you’re cleaning.

The power is long at 20 foot, and Eureka have designed the base in a way that the cord can be easily wrapped around it with the built-in clip keeping it in place. Most users have voiced their acknowledgement of this convenience.

The story of Eureka 71B’s suction power is that it’s powerful, given the fact that it uses two motors – One for suction and the other for the revolving brush/hose, which only serves to enhance the cleaning power.

While the vacuum is not designed for the purpose of cleaning pet hair, users have found it great for picking up pet hair (or any hair for that matter). However, some people have voiced their displeasure at how difficult it is to remove hair that gets stuck on to the rotating brush. To combat this problem, there is an option to turn off the motorized brush so hair is less likely to get stuck.

A feature where the device shuts itself off automatically if it’s in danger of overheating have impressed the few users who have encountered it (probably as a result of the filter being too clogged up).

The power switch on the top of the device is also use for unlocking the dirt container and filter, which many users find easy and convenient. 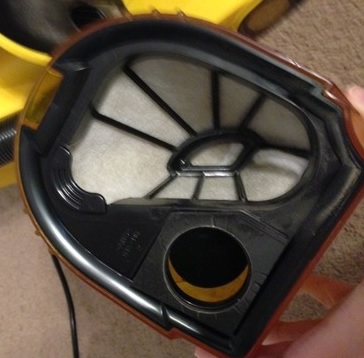 The filter is noted as being durable and high quality, though it can attract a lot of dirt and dust if it’s not regularly cleaned (I think that’s more of a testament to its cleaning ability rather than an ineffective filter).

In any case, most users like the fact that the container and filter can be completely removed and rinsed with little hassle (on the right side image is the rear of the filter which separates from the dirt container).

It appears that there is not much that can go wrong with the Eureka 71B in terms of manufacturing faults. Granted, that is case with many good corded handheld vacuums, but nonetheless, most users of the 71B have praised its build quality. Most notably, the device of one user lasted 6 and a half years before retiring itself.

The large majority of user reviews on Amazon are positive. There are plenty of favorable reviews that will help you make your decision.

Click here to read customer testimonials of the Eureka EasyClean 71B

So the points we can summarize from our research are:

It’s hard to be disappointed by something that functions as well as the Eureka 71B EasyClean. It’s a clever product that focuses on ease of use along with effectiveness. But even though it’s highly effective at cleaning stairs and carpets, by no means is it supposed to fully replace an upright vacuum to clean several flights of stairs and multiple rugs of a hotel lobby. However, it is perfect for standard home use doing minor cleaning jobs.

The ingenious revolving brush roll, attached on-board hose and 20 foot long cord that wraps neatly around the back, are all results of a well-thought out handheld vacuum design, one that will serve you for many years to come.

Check The Live Prices For The Eureka EasyClean 71B Now!